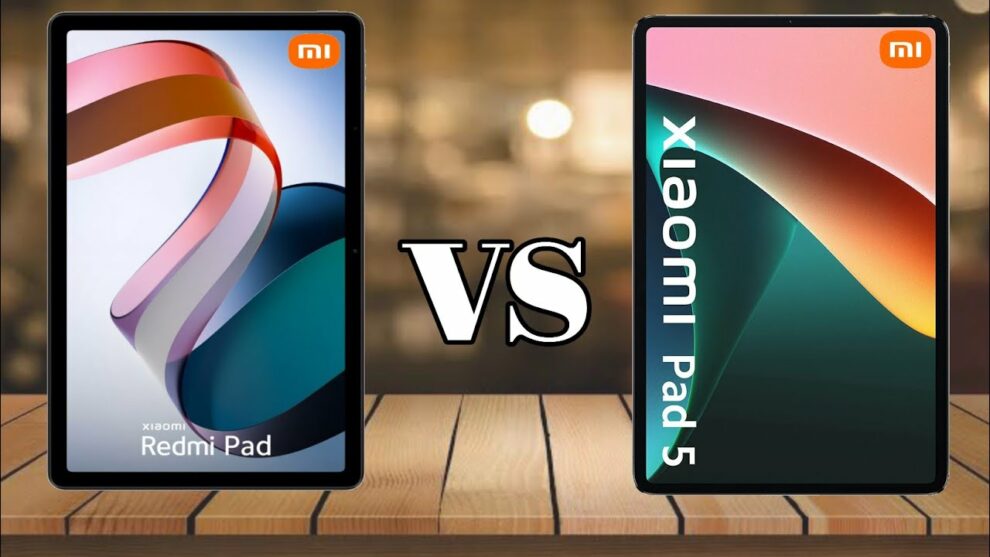 It has been just days since Redmi launched a new tablet device – the Redmi Pad. This makes for a significant development considering that this is the first time that the Xiaomi sub-brand has come up with a tablet device. With smart TVs, smartphones, smartwatches, laptops, monitors, fitness trackers, and what not that the company has to offer, perhaps the only thing missing in its portfolio is a tablet device. The Redmi Pad fills that void but it also comes at a time when its sister organization, Xiaomi too has a tablet device to offer – the Xiaomi Pad 5. So, how do the two stack up? Read on to find out which one to go for if you are confused between the two.

Coming to other specs, the Redmi Pad comes with an 8 MP camera at the front and rear along with LED flash. Connectivity options with the tablet include Bluetooth 5.3 and Wi-Fi 5. The tablet does not support cellular connection and lacks a 3.5mm headphone jack as well though there is a quad-speaker arrangement with Dolby Atmos. The tablet runs MIUI 13 which is based on Android 12 right out of the gates.

The Xiaomi Pad 5 is a more up-market offering and comes with enhanced specs to match its status. That includes a more powerful Snapdragon 860 processor that makes up the core of the tablet. There are two storage size options to choose from – 128 GB and 256 GB – though memory size remains the same at 6 GB on both versions. The tablet however does not allow for the addition of external storage. Connectivity options with the tablet include Bluetooth 5.0 and Wi-Fi 6. For optics, there is the 8 MP front and 13 MP rear cam available, complete with dual LED flash.

Also, it is a slightly larger 11-inch LCD display for the Xiaomi Pad 5, one with a 2,560 × 1,600 pixels resolution and a 120 Hz refresh rate. Other features of the display include support for Dolby Vision, HDR10+, HDR10, and HLG tech. Powering the device is an 8,720 mAh battery that is backed by 33W fast charging tech. The tablet came pre-installed with MIUI 12 based on Android 11 when first launched but has since been upgraded to MIUI 13 based on Android 12.

The Xiaomi Pad 5 however shares several commonalities with the Redmi Pad. That includes the presence of a quad-speaker with Dolby Atmos and the lack of a 3.5mm headphone jack. Cellular support too is lacking on the Xiaomi Pad 5. As for the software, Xiaomi has assured there is going to be three years of support provided when it comes to security updates while another two years of Android updates will also be provided.

Worth mentioning, both tablets run a special version of MIUI termed MIUI for Pad which has been customized for operation on a tablet device. That way, it offers special features like split screen support, floating windows, and multi-window operations, all of which are aimed at multitasking. Interestingly, the MIUI For Pad is based on Android and not Android 12L which has been specially designed for operation on a tablet.

So, there you have it, a lowdown on all that the Xiaomi Pad 5 or the Redmi Pad has to offer. This should allow you to make your selection depending on which matches your requirement the best.