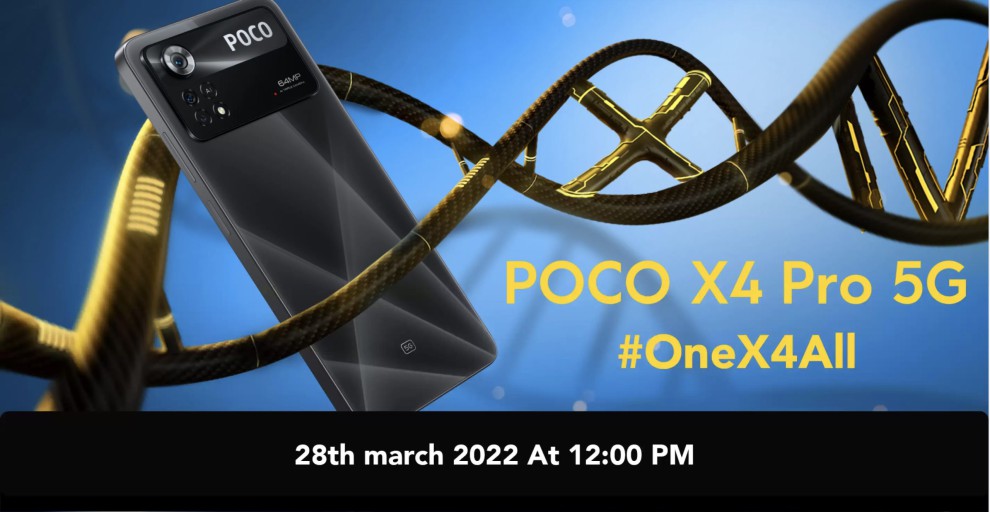 Xiaomi spin-off Poco is doing very well in the Indian smartphone market. The company recently launched Poco M4 Pro, and It has got an outstanding response from both customers and reviewers. Riding on the success of M4 Pro, the company is bringing Poco X4 Pro 5G. The Poco X4 Pro 5G will be the successor to the Poco X3 Pro.

There were tons of leaks and rumors around the Poco X4 Pro launch, and after months of wait, Poco has officially announced the launch date for 28th March 2022. The company took to Twitter to announce the launch of the Poco X4 Pro. If you want to watch the live event, you can watch it on 28th March at 12 P.M by tunning to Poco’s official YouTube channel.

We’re ready to captivate – with the #OneX4all.
Indulge yourself in a whole new dimension of smartphones with the #POCO𝕏𝟜ℙ𝕣𝕠5G.

A Flipkart Teaser page of Poco X4 Pro is already live, confirming the launch date and design. The press renders show that Poco X4 Pro 5G will have a sharp boxier design like newer iPhones. The rear panel will have a huge camera module going across the top part. The Primary sensor is housed in the upper part of the camera module.

The Poco X4 Pro 5G will feature a 64MP primary sensor. Earlier it was leaked that Poco X4 Pro will have a 108MP camera. But now it is confirmed that X4 Pro will get a 64 MP sensor. Right to it, you will find the Poco branding. The other two sensors and LED flashlights are in the camera module’s bottom part. Other than a teased image and launch date/time, there is not much officially confirmed on the Flipkart landing page.

Talking about the expected Poco X4 Pro 5G specifications, It will fit a 6.7-inch Full HD+ 120HZ Super AMOLED Display with Corning Gorilla 5. Powering the smartphone will be a Snapdragon 695 5G chipset. The Snapdragon 695 is built on a 6nm FinFet process and features Kryo 660 CPU and Adreno 619 CPU. The smartphone is expected to launch in 8GB RAM and 256GB Storage configuration.

On the software front, it will boot MIUI 13 based on Android 11. Coming to Optics, the Poco X4 Pro will boast a Triple camera setup in which the primary sensor will be a 64MP shooter combined with an 8MP ultra-wide sensor and 2MP depth sensor. For taking selfies, Poco X4 Pro gets a 16MP sensor. Giving juice to the device is a 5000mAh battery with 67W charging. The Poco X4 Pro should be priced around 20k in the Indian market. What do you think about Poco X4 Pro 5G? Are you excited about it? Do let us know in the comments.